Rewiring a jack on a vintage Gibson hollow body isn’t always as easy as it sounds. 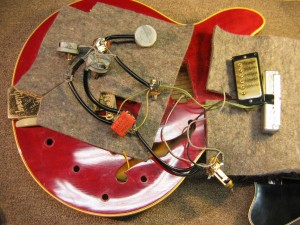 A good customer of ours recently purchased this Gibson ES345, a beautiful and rare guitar, but one that just wasn’t sounding right. When it came to us, there was so much scratching and static that it was difficult to tell which or how many components worked. He also wanted to convert the stereo output jack to mono. Wired in stereo, each pickup is wired to one side and a typical guitar cable would only allow us to hear one of those. You either use a stereo splitting cable, sending each pickup’s signal to a different amp input, or you change a single wire at the jack and convert it to mono like most guitars. That’s easier said than done in this case however. 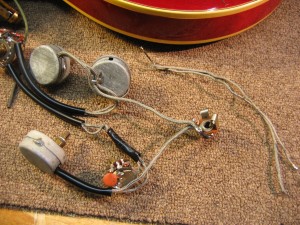 Most of the time, when changing even a single solder point on a hollow body guitar, we need to extract the entire wiring scheme through the bridge pickup hole. This takes time and patience, but does allow us to get a good look at components that probably haven’t been handled since the guitar was assembled in the mid ’60s. You can see the protective cans that encase the control pots and how the pots themselves are preserved – looking like brand new ones. The pickups checked out and worked perfectly. What didn’t age so well, however was the wiring itself. Gibson has always used a single insuated conductor wire with a metal braid as a shield. Over the past 40-some years, the inner wire’s insulation has dried and crumbled. This allows the inner hot wire to rub against the grounded braid, shorting the signal completely in some cases. There were so many areas where this happened that we had to bite the bullet and replace all of the connecting wires in this guitar. We used modern wire that looks the same as the old stuff. Of course this means one less original element to this guitar, diminishing it’s value a bit, but this guitar was purchased to be played and the crumbling old wire had to go. Then it all goes back through the pickup cavity and into place. Sort of like building a ship in a bottle.

With a new bar for the Vibrola tailpiece, and the guitar polished & set up, it looks and sounds great. There’s just something about those early Gibson humbuckers… Very nice. 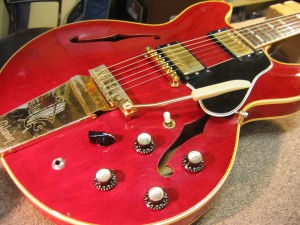