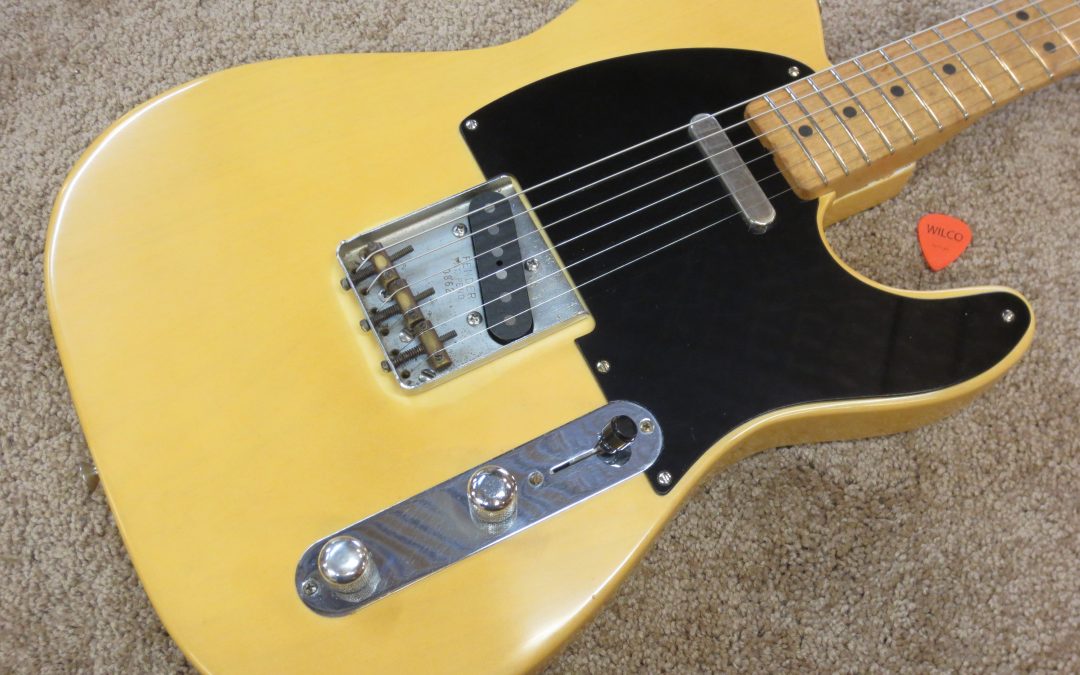 The members of Wilco make their music in our neighborhood and we’re lucky to see lots of beautiful instruments from their vast collections. When guitarist/keyboardist Pat Sansone sent us this rather beat-up looking Telecaster we weren’t really sure what it was at first. 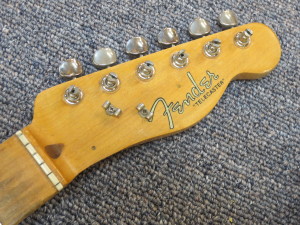 Pat, with great understatement, had told us only that he was sending over something “new and cool.” It looked old but was clearly refinished with an unusual pale yellow that seemed to pick up the wood grain beneath. There were no strings and  it really didn’t seem to be anything that special, that is until we removed the neck and discovered that two critical areas of original finish had been preserved. Somehow, after a full refinish, the heel and neck pocket both still had their original handwritten dates. 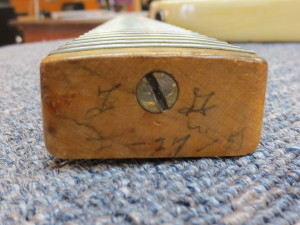 Fans of early Fenders will recognize those cursive initials as “TG” – belonging to famed Fender builder Tadeo Gomez. The date below reads 2-27-51. 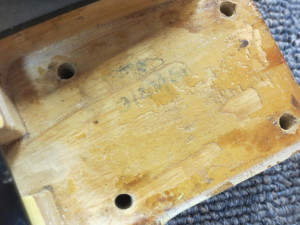 The neck pocket of the body was marked “TK” 3/23/51. That’s another common set of initials in 50’s era Fenders (anyone know the name of the individual behind TK? Let us know!) That would seem to place this “Telecaster’s” construction in February/March of 1951! Pretty cool, eh? That got us looking deeply in the fantastic resource that is  Nacho BaÃ±os’ book The Blackguard. There we learned that the date on this neck was printed just days after The Fred Gretsch Company sent a telegram calling for Fender to stop its use of the name “Broadkaster” [sic] on its electric guitars because that was a name Gretsch was already using for a drum set. 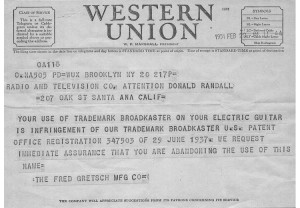 Fender, of course agreed (the very next day) but instead of re-naming their product right away, they simply cut the word “Broadcaster” off of the headstock logo and continued making the guitars until settling on the name Telecaster in the late summer of that year. So this guitar isn’t really a Telecaster at all. It’s what’s known as a Nocaster, from those few months in 1951 between Gretsch’s telegram and the release of the first Tele. Knowing this, we looked again at that Tele headstock logo and realized it was a non-original reproduction. It was also in the wrong location and there were several holes that were drilled for additional string retainers (or string trees.)

So Pat agreed to refret and refinish this guitar – which had already been stripped and refinished at least once. This time, however, we would go for a restoration of the original look. We would preserve the back of the neck, the neck heel, and the neck pocket that retained the original finish and those important historic dates. Here’s a look at the process: 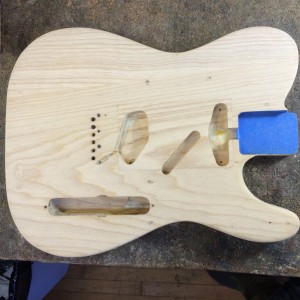 With the finish stripped, we can see that the pickup area appears to have been routed out and then filled with a replacement piece of ash that amazingly seems to fit perfectly with the grain of the rest of the body. 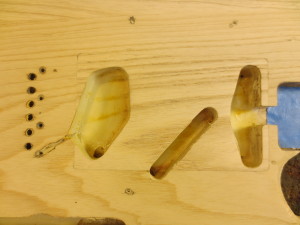 That’s some outstanding work by a repair person in the past. The blue tape in the neck pocket will protect the historic pencil markings that are so vital to this guitar. 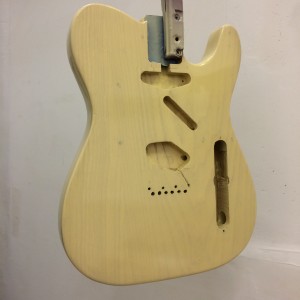 In the spray booth we start with a blonde under-coat that resembles what this guitar likely looked like in 1951. 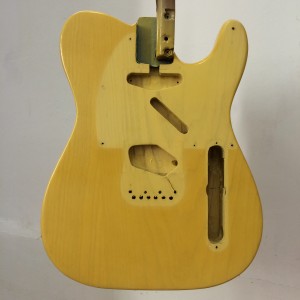 But of course 1951 was more than 65 years ago and a nitrocellulose lacquer finish ages over time where it is in contact with sunlight, oxygen, smoke, and other environmental elements. We simulated this effect to leave the silhouette of the pickguard and bridge cover. Those won’t really be visible when it’s all put together but add to the authenticity of the guitar’s appearance. 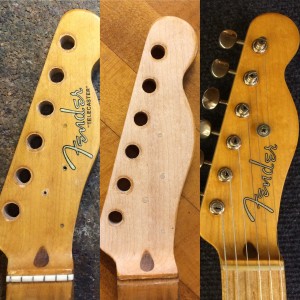 The headstock’s transformation back to “Nocaster” including stripping and plugging the holes from additional string trees added over the years. 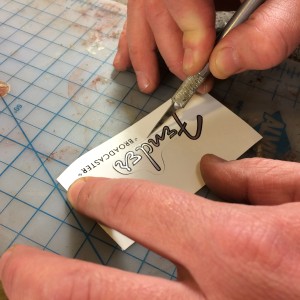 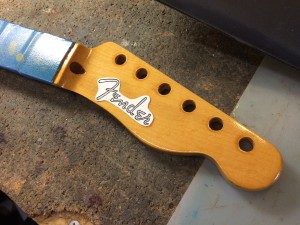 Was it overkill to use a “Broadcaster” logo and trim it by hand like they did in 1951?… 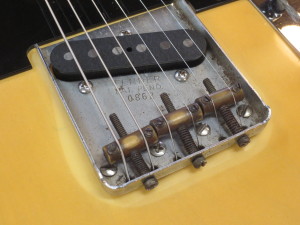 Or to leave the halo of a bridge cover around the bridge?… 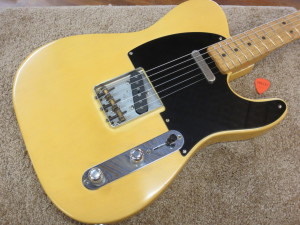 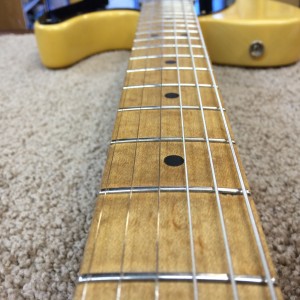 Nah. This one deserved it. Once it was strung up with a set of Lollar pickups (that’s a J-Street in the bridge and a Special in the neck) it sounds fantastic. In fact, before even plugging it in it was obvious that this one has a resonance and ring to it that you don’t find in every Tele. There’s something about that piece of wood that was cut more than 65 years ago that reminds us that a guitar’s sound has so much to do with the trees it’s made from. We’re really glad for the chance to bring this special guitar back to life. 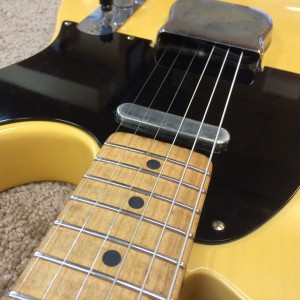