*Beware: another one of those ‘I found this vintage Les Paul in my dad’s closet’ stories follows. I like to think that if my dad had one of these in his closet I’d have found it by now. 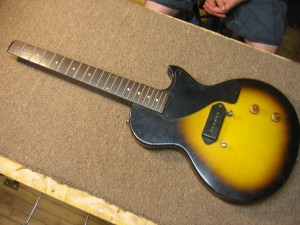 This 1956 Les Paul Junior belongs to a friend who, yes, found this guitar in her dad’s closet. But she couldn’t play it because there’s a pretty obvious piece missing: the entire headstock! This isn’t your average reglue job. This will require building a new headstock, replacing the truss rod, and making it look as if nothing ever happened. Read on to see how. 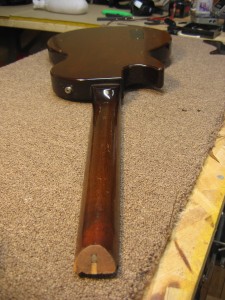 Our friend Laura told us this guitar had been in that closet in this condition for more than 20 years before she brought it to us. She recalled that the headstock had broken off years ago and had been repaired, only to break off again. You can see why; the repairman sawed off the end of the neck, cutting straight through the truss rod and creating a very small and unstable gluing surface that was never going to hold under the tension of guitar strings. One flying leap off the drum riser and it probably popped right off!

Look closely at the angle of that cut. If you can imagine, the string tension was pulling the headstock in a direction that would encourage that glue joint to open up. We’ll be cutting a new angle that points the other direction. This will have the strings pulling the joint closed rather than open.  Before we can do anything else, we’ll have to remove the fretboard. We start by removing the inlay dots and heating the fretboard. 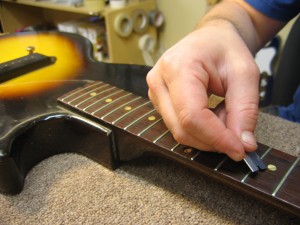 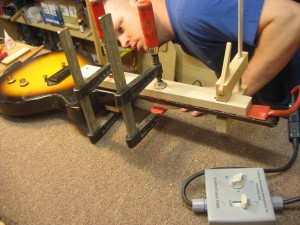 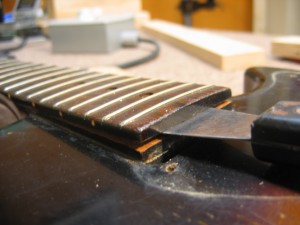 Once the fretboard is off, we removed the remnants of the old truss rod. This took some serious negotiating with rusted metal that had fused itself into the wood over 52 years. 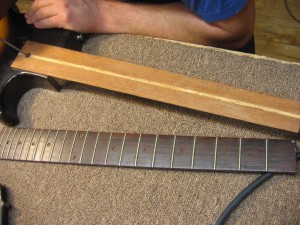 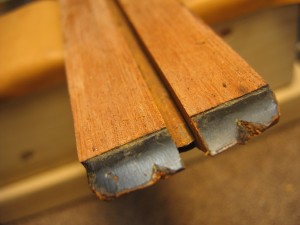 At this point, we need to create a scarf joint (aimed in the right direction this time) and graft on a piece of mahogony from which to carve the new headstock. 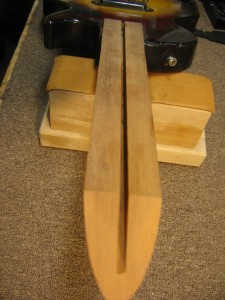 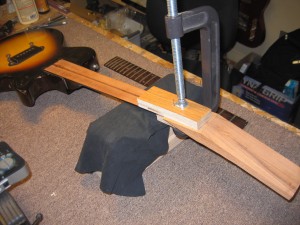 Next, a new truss rod is installed that matches the look and function of the original one. 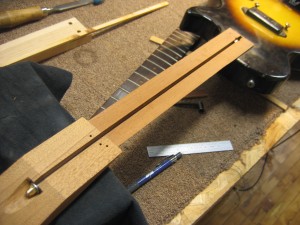 Now it’s time for this angel to get it’s headstock “wings.” Gibson headstocks have 3 pieces of mahogony that are joined together, then shaped by hand to form the profile that’s become so familiar to us. 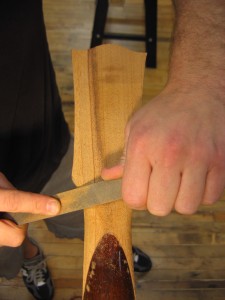 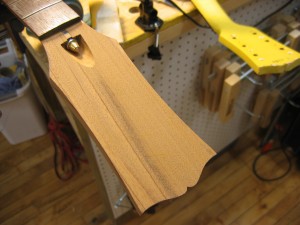 In the background you can see a 1959 TV yellow Les Paul Jr. we used as a template to match all of the dimensions of a 50’s Gibson headstock. Once the neck shape is correct, we apply stain to match the color of the new wood to that of the old. 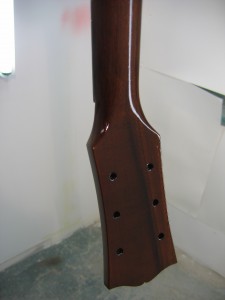 Next comes the Gibson logo using a waterslide decal.  Just like the original. 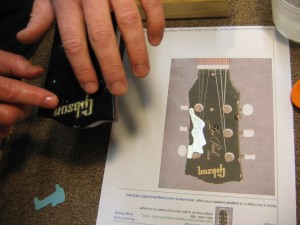 We apply a top coat of traditional nitrocellulose lacquer and distress its appearance to match the original finish on the rest of the guitar. While we were working on this job, the owner found the original tuning machines but with their white plastic buttons dry and crumbling. We replaced the buttons, allowing us to keep and use the vintage tuners. 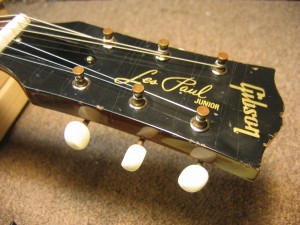 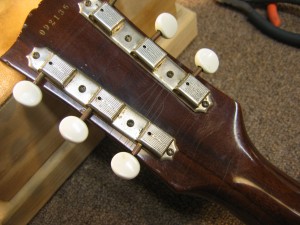 Vintage Gibson fans will notice that the serial number we stamped does not begin with a “6” as a 1956 model would have. The truth is, we aren’t trying to fool anyone with this repair. Anyone who knows what to look for will recognize that the headstock is not part of the original guitar. To make up a correct-looking serial number might bring it a little closer to what an original would look like, but it wouldn’t change the fact that the headstock is a replacement. So we decided that since the number could be anything at all, it may as well be Laura’s father’s birthday. It’s just a little tribute to the man who first bought this guitar when he was 20 years old in 1956. 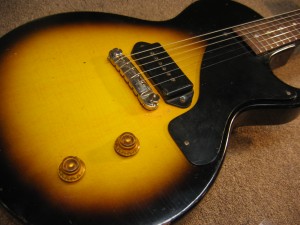 What a great guitar!