In this post, you’ll see how we tackle a very difficult neck re-repair on a Chicago-made Lyon and Healy Style-A Mandolin. 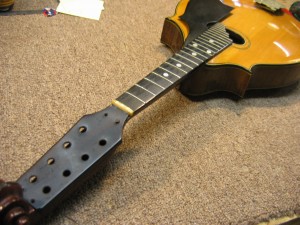 A new customer brought us a remarkable and beautiful Lyon & Healy mandolin that was made here in Chicago nearly a century ago. This is a “Professional” or “A” Style instrument that was at the top of the company’s  line of mandolins in the 1920’s. It has a very delicate and ornate scroll headstock that unfortunately broke apart many years ago. It was fixed and the repair held for a long time before recently coming apart. Our challenge is to get the headstock solid enough to play again, while maintaining as much of the instrument’s original qualitity and character as possible. What’s more, we’ll need to work around a few unexpected elements of the previous repair. 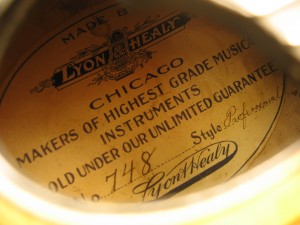 The Lyon & Healy company began in 1864 as a partnership between George W. Lyon and Patrick J. Healy. Throughout the company’s history it produced a wide variety of musical instruments including brass, percussion, pianos, organs, harps, and assorted stringed instruments. George Lyon’s middle name, Washburn, was used for its  line of  guitars, mandolins, banjos and other instruments. That company obviously still exists today and has revived the Lyon name for a side line of economy guitars.  While Lyon & Healy no longer makes guitars or mandolins, the company still exists  here in Chicago, building some of the finest harps in the world.

Here’s how the mandolin arrived in our shop. 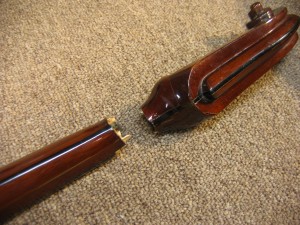 After  removing a peghead overlay, we found a break that occurs at nearly a 90 degree angle to the neck. That’s a difficult job on any kind of neck since there’s very little lateral gluing surface to give the repair strength.  But a close look shows that the previous repairman used small dowels to splice the two pieces together. The dowels and holes are easily visible, but simply gluing them back together is not going to do enough to strengthen this neck for future playing. 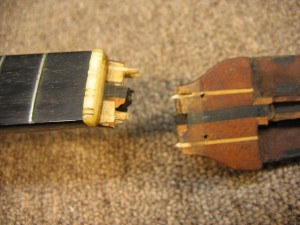 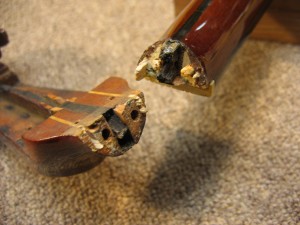 After a lot of deliberation and plotting, we decided that we’ll need to rout a channel and splice a larger piece of mahogany across the break to increase the amount of gluing surface and to solidify the interior of the neck. The trick is doing this without further damaging the neck or the headstock. The repair begins by fitting the dowels and the fingers of the broken pieces and simply gluing the two pieces together. The wood block and wedge (look closely- the small darker piece of wood) at the end of the headstock kept the loose piece from squirting away as the glue set. 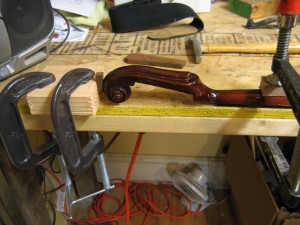 After allowing the preliminary repair to fully cure, we rig a routing platform inside a vise and by using a Dremel, carefully clear a channel for that mahogony splice. Dan has to be careful not to go too far and rout through the back of the neck.  When he’s getting close, he stops and shapes a block to fit perfectly into the channel. 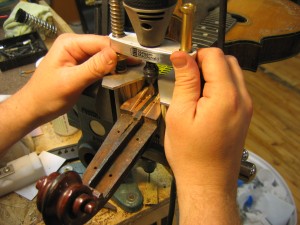 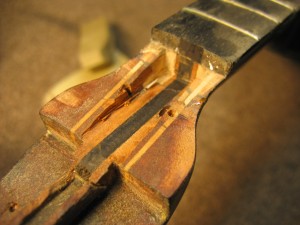 After meticulously cleaning and shaping that rout, we mix some mahogony dust and epoxy together and slide our mahogony block into the rout. 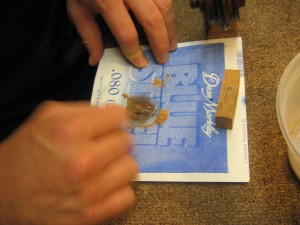 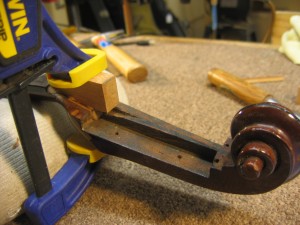 Next, Dan chisels away the block until it fits the profile of the headstock. 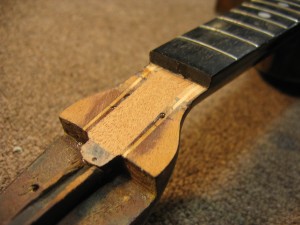 Often, we’ll touch-up a headstock repair to make it disappear. In the case of a mandolin, we might even refinish the entire neck. But in this case we decided against that, given the instrument’s vintage status and the time/cost it would take to properly finish all of the ornate curved surfaces that make up this neck. Nevertheless, it looks and sounds tremendous and most importantly, this repair should last for many years to come. 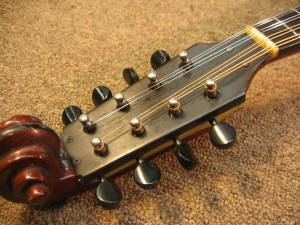 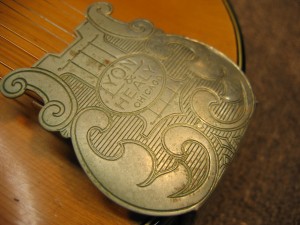 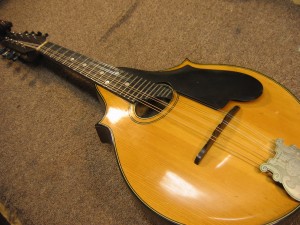