Sometimes the guitar itself is more interesting than the repair.  It would be a shame not to share some of those instruments. So with that in mind, presenting our first “Featured Guitar.” 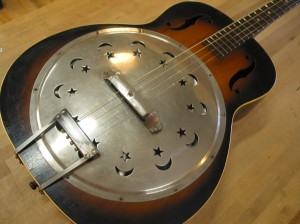 The owner of this Regal tenor resophonic guitar is something of a tenor guitar connoisseur. He found this one listed in an online tenor guitar forum with no assurances that it would ever play. He bought it just because it looked so cool, thinking at the very least it would look good on a wall. But when it arrived in decent condition, he decided to see if it could be made playable. We installed a new resonator cone, spider bridge, and saddle and set the action to be nice and easy. It turned out great. I suspect famed tenor guitar player Neko Case would love how it sounds. 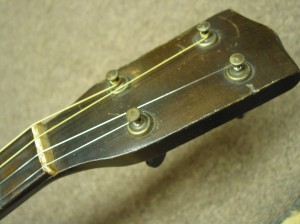 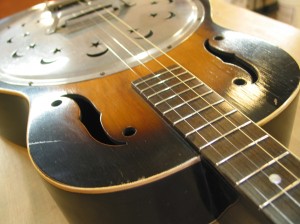