How do you know when a speaker is blown? 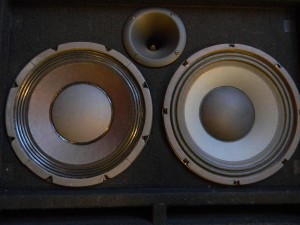 The owner of this GK 1001 RB 210 combo, was getting a flabby, distorted output from his amp – particularly at loud volumes. He tried running the external speaker output to a separate speaker cabinet and found that it worked fine that way. There could be a problem with the output jacks or with something deeper inside the amp. But Pat suspected it was a blown speaker. He needed it fixed in time for a recording session in just a few days; could it be fixed in time? 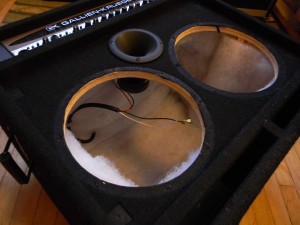 The owner likes to push the volume on this amp, but that can cause problems. There’s no limiter to keep this amp from distorting and solid state power amp distortion can damage speakers. Given that the stock speakers on this amp were inexpensive and made in China, it was no surprise that they didn’t last long. 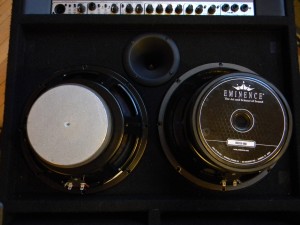 For the time being, we’re just replacing the damaged speaker and an Eminence Delta 10 is a good quality replacement that will hold up better in those high volume situations. 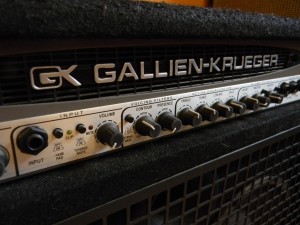 When speakers are damaged or wearing out, even low volume notes – ones that shouldn’t sound distorted – tend to sound fuzzy on the decay. Sometimes louder playing actually sounds less distorted than quieter playing. As they get worse, the symptoms become more and more obvious until the amp is just unusable, like this one was. But after a new speaker and cleaning out of the amp chassis, this GK is again ready to rock.