Vintage guitar and amp collectors always want to see things in their most original condition. So what do you do when a vital component should be replaced? 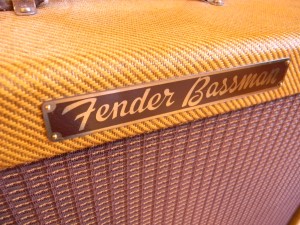 This is one of the classics, folks. It’s a vintage 1956 Fender Bassman. One of the earlier generations of Fender’s top of the line amp, the 5E6A circuit evolved into the coveted 5F6A – 1959 Bassman. It arrived in great condition – beautifully lacquered tweed on the outside and every bit of original hardware intact. And when we opened it up, almost every component appeared to be from 1956  too! Great, right? Well actually, it puts us (and the owner) in somewhat of a precarious position because a number of those old components are worn out and really should be replaced. They don’t sound their best; but more importantly, if we were to wait until they go completely bad – malfunctioning and leaking – it could damage the rest of the amplifier. Vintage collector on left shoulder: “Don’t take them out! Then it won’t be original!” Musician on right shoulder: “I don’t want this expensive amp eating itself alive and I sure don’t want it malfunctioning at just the wrong time.” …Which voice do you listen to? 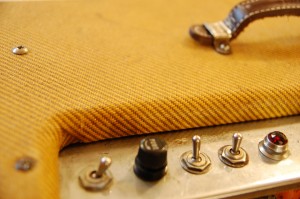 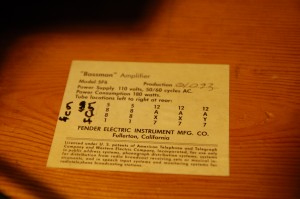 As we inspect this Bassman, it’s quite obvious that at least 2 speakers have been replaced, but the tubes look as if they haven’t and the filter caps are definitely all-original. That means they’re 56 years old! In general, high quality filter caps, which filter out the electronic noise and high voltages coming into this amp, can be expected to do their jobs well for about 20-25 years. So we’re way past overdue to replace these bad boys. We’ll need to weigh the pros and cons of leaving the amp original and intact, or replacing those caps with better-functioning new ones.

(By the way, if you’re real observant, you may have noticed the inside decal above that reads “Model 5F6” as opposed to 5E6A. After studying several different schematics, Pat determined that this was a transitional model that did not align with the sticker. Is the sticker a fake? Was it simply a change that was overlooked when they applied it at the factory? Unfortunately, there’s no way to tell for sure!) 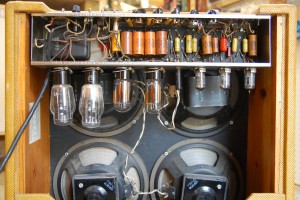 So back to those caps; the only “pro” to keeping them is that they’re the originals. And we all know what importance that word has in the vintage collectable world. 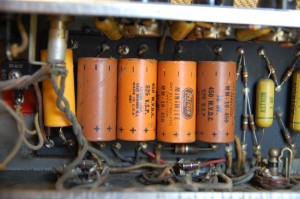 They’re nice and old looking, but functionally, there’s no upside to keepingthe old ones. The amp sounds okay right now, but old filter caps can lose their effectiveness slowly. Over the next few months of regular use, the amp will start having intermittent problems like the hum of passed voltage, weird noises and crackles, etc. Most likely, those sounds will start happening just as you are ready to hit ‘record.’

We also notice some physical signs of deterioration; bubbled and pimpled appearance at the ends of the caps tells us they’re about to start leaking inside the amp. This is where that initial question is starting to answer itself. This is not like leaving the original pickups and pots in a ’65 Strat. This is like keeping the original oil & filter and brake pads on a 65 Mustang. To leave them in would be bad for the amp’s performance and could damage other components in the amp – including expensive transformers which are a crucial factor in the tone signature and retail value of the amp. And as for those magic sounds we’ve heard on all the old records? Those were made when this amp was new, not 56 years old! Decision made. Get ’em outta here. 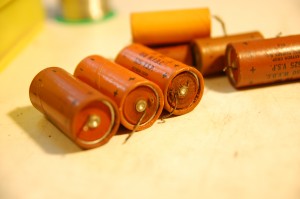 Pat decided to use Sprague Atom replacement caps for this job. They’re the right call both visually and functionally for a vintage amp like this. A little more expensive than the ones we’d put in a Hot Rod Deville, but it’s worth it. It looks healthier already, don’t you think? 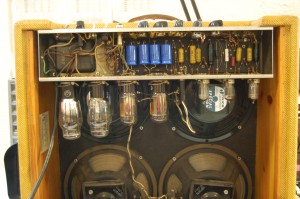 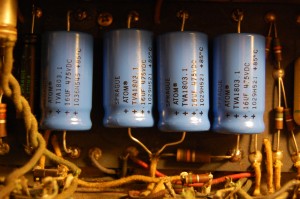 We also learned that, in fact, all four speakers have been replaced at one time. One had gone bad, so we replaced a pair with updated Jensen Special Design. 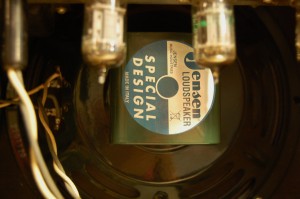 A little additional clean-up and this beauty is ready to go. While plenty of vintage amps function and make acceptable sounds with their old caps, replacing them is almost always the right thing to do. New filter caps do not color the tone directly, but when old ones begin to deteriorate and fail, bad things can start happening quickly. 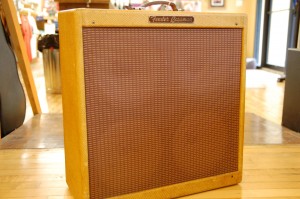 The proverbial proof being in the proverbial pudding, this amp sold almost instantly when we returned it to our friends at Chicago Music Exchange. Thanks CME for the chance to repair a real classic!