An Electric Sitar Gets A Pick-up-Grade

The National Slimline proved to be the perfect pickup for this Rikhi Ram electric sitar. 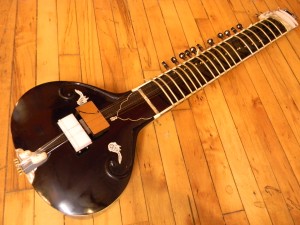 We don’t see many sitars around here, so it bears mentioning this interesting electric model. It’s made by Indian builder  Rikhi Ram and features a top set of six main strings and a set of 11 sympathetic vibrating strings underneath. When we received it , the original factory-made pickup had been replaced rather clumsily with a Duncan Dimebucker – which is a very good pickup and, using rail magnets, not a bad choice for an instrument with non-guitar string spacing. However the pickup itself needs to sit between the two courses of strings and be able to amplify both sides and the Duncan was so thick that it touched the strings on both sides – without amplifying the lower set. We needed to find a slim pickup to sit between the two sets of strings and amplify both. Here’s the solution we came up with. 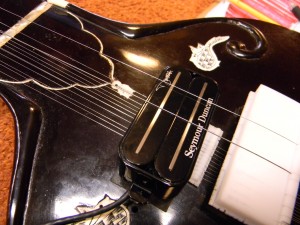 Here’s a look at the Dimebucker installation. The lower strings are touching the bottom of the pickup and the upper strings are actually sitting on the pole pieces. That’s not going to work! We’ve done several successful installations of the very thin National Slimline humbucker pickup on resophonic guitars like Dobro’s and Nationals. We decided that was a better choice here too. As it’s name suggests, it’s only about 1/4″ thick, and once we put a couple of rosewood lifts on either side of the lower string set, it not only fit right, but offered just the right amount of volume from that sympathetic course. The tone of these pickups is very clear and clean, which keeps it sounding like an actual sitar rather than an electric guitar. 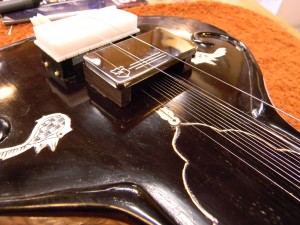 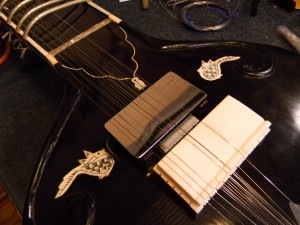 After some failed attempts at actually playing this instrument, we decided to leave it to someone more qualified. Mr. Harrison, take it away…