This guitar was in such bad shape when we arrived, we almost didn’t repair it. By the time it went home, we and the owner were glad we did!

This Taylor GS7 was accidentally dropped and unfortunately landed in an unforgiving spot. Sometimes a guitar takes a fall and a small dent or two is the only result; you chalk it up to wear and tear, and move on. This one wasn’t that lucky. The result was a series of breaks and splits in the spruce top, a number of loose braces, separated binding, and a missing chunk on the edge of the top. We decided to repair the structural damage, then remove the neck and bridge to refinish the entire top. But to make it look great, we took it one step further. When it was all done, we knew we made the right choice. We started by repairing the top cracks themselves and cleaning up the binding channel to re-glue the edge binding.

Next, came the large areas of missing top material. Joe decided that rather than having two sections to patch, it would be a better looking and easier repair to clear a single section and fit one replacement piece. 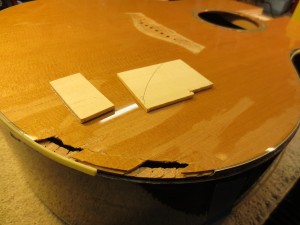 He chose a piece of spruce with similar looking grain patterns and used a Dremel tool to carefully open and clean up the edges of the fracture. 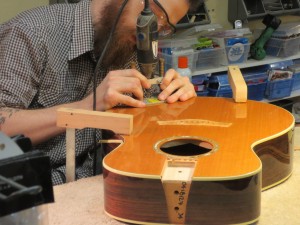 With the spruce patch in place, he was ready to replace the binding that had completely broken off in that area, smoothing the edge with a sharp chisel. 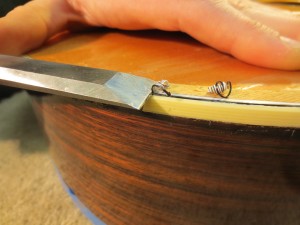 Next he removed the bridge and completely sanded away the finish down to the bare wood. Next a few sealing coats of clear paint. The patch was still visible and fairly conspicuous – so we had an idea… …how about a sunburst? It turned out beautifully and masked a complex series of repairs to the point that the owner can forget about it completely and return to making music with a new/old friend. 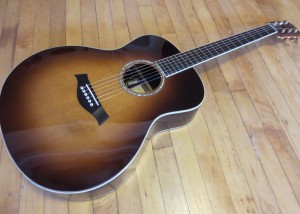