A New Neck For A National Glenwood 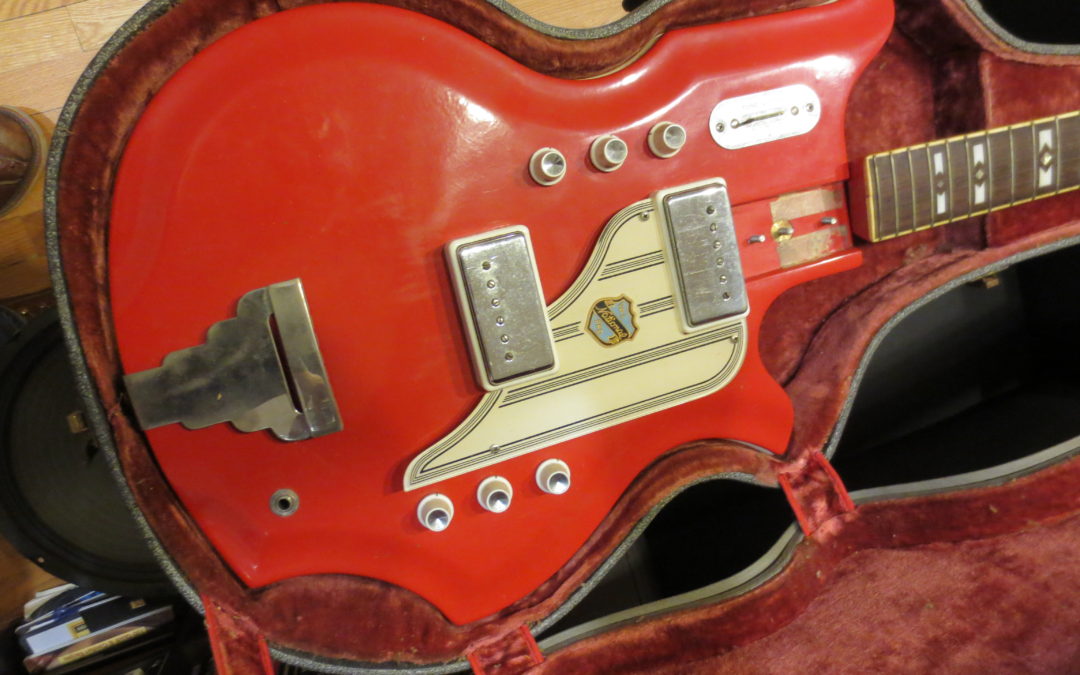 A beloved long-time friend had been sitting for too long with a broken neck. It was time to bring it back to life. 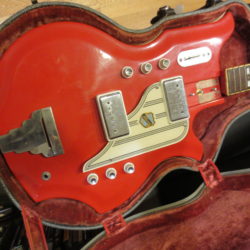 I’ve been meaning to share this crazy repair for a while. It’s a 1960’s National Glenwood 95 – one of National’s “res-o-glass” models in beautiful bright red with the classic “map” shape. Here’s a great article from Vintage Guitar magazine on the history and evolution of these remarkable guitars. Appearing just a few short years after Fender and Gibson’s early designs, the fiberglass body and unique shape were remarkably forward looking and have only gotten more popular through the years. This particular guitar still belongs to its original owner but when the headstock broke off a number of years ago, it was tucked away and more or less left for dead. Once we started planning our approach to this repair, it was easy to see why it wasn’t fixed right away. A few elements of the neck design made a typical headstock re-glue impossible. First was that the front of the headstock featured a white multi-ply plastic overlay with the National emblem in raised plastic. Glue and paint weren’t going to cut it when it came time to make it look right. 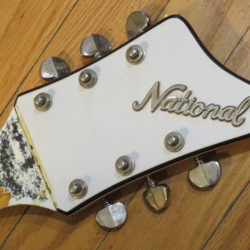 But even more troubling was that in the core of the neck, there isn’t a truss rod or even a typical steel reinforcement, but a huge metal bar that takes up easily 80% of the neck mass. That certainly helped keep the neck straight, but it also weakened the headstock area because of the amount of wood removed to make room for it. When it took a blow, the bit of wood left on the sides wasn’t enough to withstand the heavy string tension and the neck snapped in two. There’s almost no wood exposed to create a gluing surface so simply gluing the two sides together isn’t going to be strong enough to function as a guitar. So we decided the neck needs to be replaced. 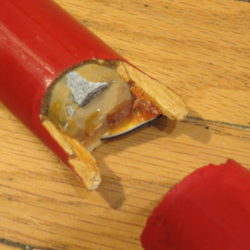 In an effort to keep costs down, we first turned to aftermarket makers thinking we’d re-shape a paddle-head neck blank. But nobody makes a neck with this scale and heel shape and even if they did, the cost of recreating the ornate fingerboard inlays was going to eliminate any savings. Then we thought of Eastwood Guitars who make fun and affordable replicas of these and other cool vintage guitars. But those wouldn’t work either because of the heel shape. 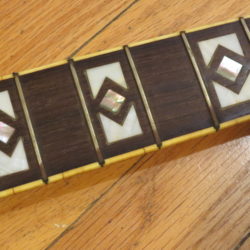 So the only option left became increasingly obvious: we would need to make a new neck from scratch that fit the exact dimensions of the original, then use the original fingerboard and logo to make it look correct. 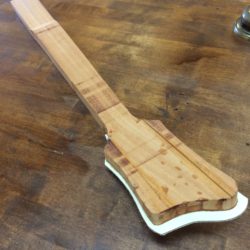 After carefully removing the original fretboard with all its inlays, Joe made a rough-cut mahogany neck with the headstock shaped from the original. This neck will get an adjustable truss rod instead of the oversized support the first one had. 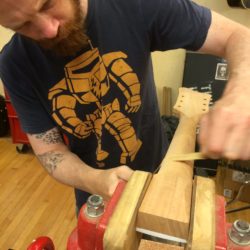 Then he shaped the heel and back of the neck to match the old one. 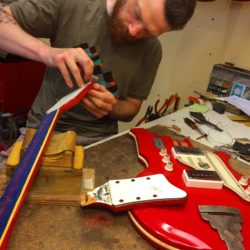 Next, he re-glued the original fretboard, headstock logo and inlays, added new frets, and matched that killer red! 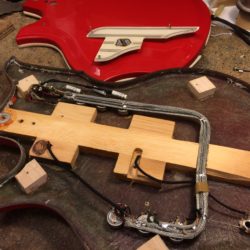 He then removed the back and cleaned up the 50 year old control pots so it sounds just right… (take a look under the hood!) 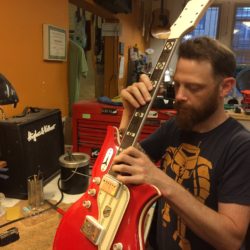 Finally, it’s time to fit the neck to the body and set it up. 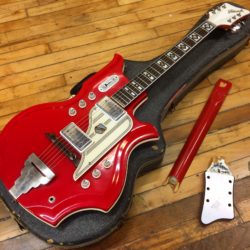 Here’s the stunning final product. This was a long process but it was great to put this historic National Glenwood back on the Map!