Not your average 1970’s acoustic, this Mossman South Wind is a great example of one of the better small manufacturers of that era. We reset the neck angle and refretted it for more comfortable action and sound. 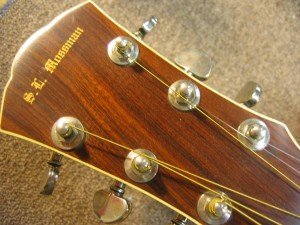 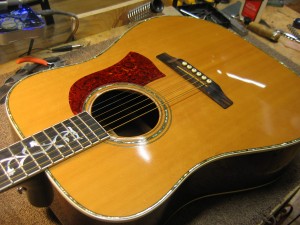 Mossman Guitars is a smaller American guitar company with an interesting history dating back to the mid 1960’s. They have always sought to focus on high quality construction and materials

The owner of this South Wind model suffers from arthritis in his hands and needs his guitars to be set up with low action. But this particular guitar, like most acoustics over 20 years old, had gradually developed an under-set neck that is evidenced by high action and a low bridge saddle. A simple set-up just wasn’t going to give us the results he needed so we opted to reset the neck angle.

Here you can see the string action where the neck joins the body.  It’s what some guitarists might consider playable, but with his arthritis, it was just too uncomfortable for the owner to play.

If the saddle were sitting up nice and high like on a newer guitar, we could lower it to bring the strings down. But if we did that here, the strings would not not have enough downward pressure or break-over to produce a strong sound. It would end up sounding like a sitar. So we’ll need to remove and reset the neck angle and replace the saddle with a taller one. 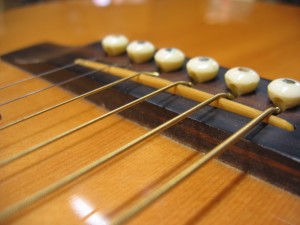 The Mossman utilizes a neck joint that is part bolt-on and part glued mortise and tenon so after removing the bolts, we need to loosen the glue by injecting steam into the neck pocket. At that point the neck comes off rather easily. 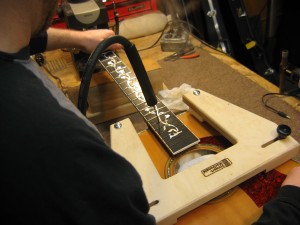 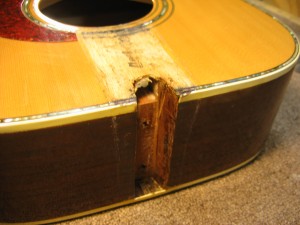 Then Dan re-shapes the neck heel so that it will join the body at the correct angle. 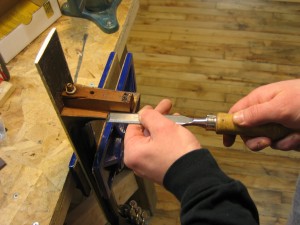 Then he re-attaches the neck to the body. 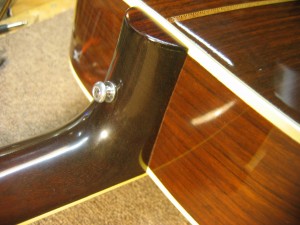 As with most neck resets, we’ll also level and refret the fretboard. 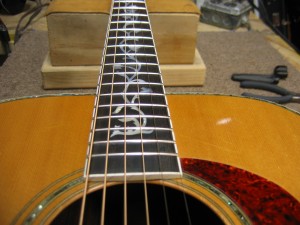 Finally, this 30 year old Mossman is ready to go with easy action even with a new taller saddle.  It should easily have another 30 years of  music ahead of it. 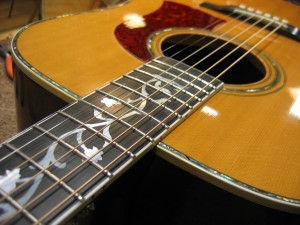