Not all 1930’s Nationals are created equal.  We thought this 1932 Style O needed a refret and maybe a little neck tightening, but soon learned that a single design factor makes this one particularly challenging. The vintage National resophonic (or resonator) guitar is undeniably one of the most striking-looking guitars ever. This Style O model that came into our shop went a step further with a Hawaiian tropical scene etched right into the back plating. But there were a few important areas that needed work so it would actually play and sound as beautiful as it looks. With the body in nearly perfect shape, the most obvious order of business was a long crack in the fretboard.  Since the frets were worn flat, we decided to go ahead and refret the whole neck. In the process, we would be leveling the fretboard which would create enough ebony dust to fill and repair that crack.  Easy enough. 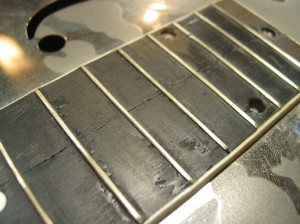 Upon even closer inspection we noticed that the fretboard was bowed upward into  a “ski jump” shape that caused most of the high notes to buzz noticibly and in some cases, not to sound at all. This was because the neck itself was loose and pulling up under the tension of the strings. What this guitar really needed was a neck reset. The neck and supporting neck stick (which runs the length of the body inside) is held into place by just a few screws, including three that sit below the pearl fretboard inlays above.

Once the neck was off we also noticed that the resonator cone inside was dented and distorted, so a new cone from National is also in order.

Once the neck was off, we repaired the weak and cracking areas of the fretboard… …removed the old frets and leveled the fretboard…

…and began resetting the neck to the body. We soon discovered that the top was not really strong enough to support the neck under string tension. The manufacturers tried to reinforce the top with two small strips of mahogony that run parallel to the neck post. These probably did the job early on, but after 80 years, they aren’t as stiff as they once were and they aren’t much help.

Here’s a view of the inside. On the left, you can see the neck “stick” which runs the length of the body; on the right is the underneath view of the F hole; and in the middle is the original top support piece with a screw passing through the middle. In 1934, two years after this guitar was made, National realized this design flaw and solved it simply by rounding the edges of the F holes. It’s an old metal working trick that smooths the edges but also strengthens the metal itself. Since we weren’t going to be rounding edges of a vintage guitar (not to mention the chrome plating which we don’t do) we got a great idea from master resophonic craftsman Paul Beard. At Paul’s suggestion, we used a thin piece of flatsawn maple (above,) shaped it just for this guitar, and fastened it inside using those mounting screws. We didn’t have to add a single extra screw hole or modify the gutar at all to fit this piece in. Here it is inside the guitar: Once we put it to the test, we found this addition added the support we needed to keep the instrument from folding up on itself. The extra bit of rigidity made all the difference in the world. For this insight – as well as MANY others, we thank Paul Beard.  If you’re a fan of resophonic guitars, please check out his gorgeous instruments at www.beardguitars.com.

Next, we replaced the damaged original resonator cone with a new one from our friends at National and hammered in the new frets. Notice that the crack is now gone too. 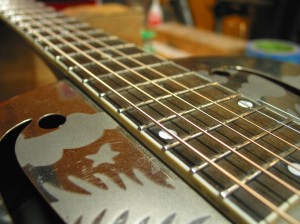 Strung up to pitch, this guitar is now playing great – comfortable action, clean notes, a crack-free fretboard, and a stable and solid neck joint. It was in remarkable shape given the nearly 80 years of string tension and use it’s been subjected to, and with this repair, it should be last another 80! 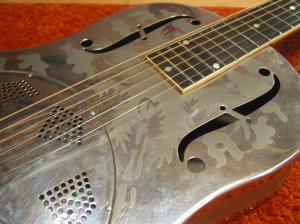